A Virtual Camp and a Summer Training Program.

This will be our third virtual camp and we’ve found that serious runners have loved the concise webinars. We start at 12 p.m. EST each day, allowing you to join us after your morning run. All webinars are recorded and posted within 24 hours, so if you miss being a part of the fun live you can watch the recording.

What are the little things?

Athletes will learn them through videos they then have lifetime access to. Phil Wharton teaches Active Isolated Flexibility (aka “rope stretching) in his videos and campers will learn proper warm-up and cool-down routines, fascial release routines and strength routines from Jeff Boelé.

And then there’s the gear!

You’ll get a Nike Dri-Fit shirt, a copy of Coach Jay’s Consistency Is Key, a Nalgene water bottle. For training, campers receive a rope, two mini-bands, and two lacrosse balls that they’ll use to follow along with Phil and Jeff. 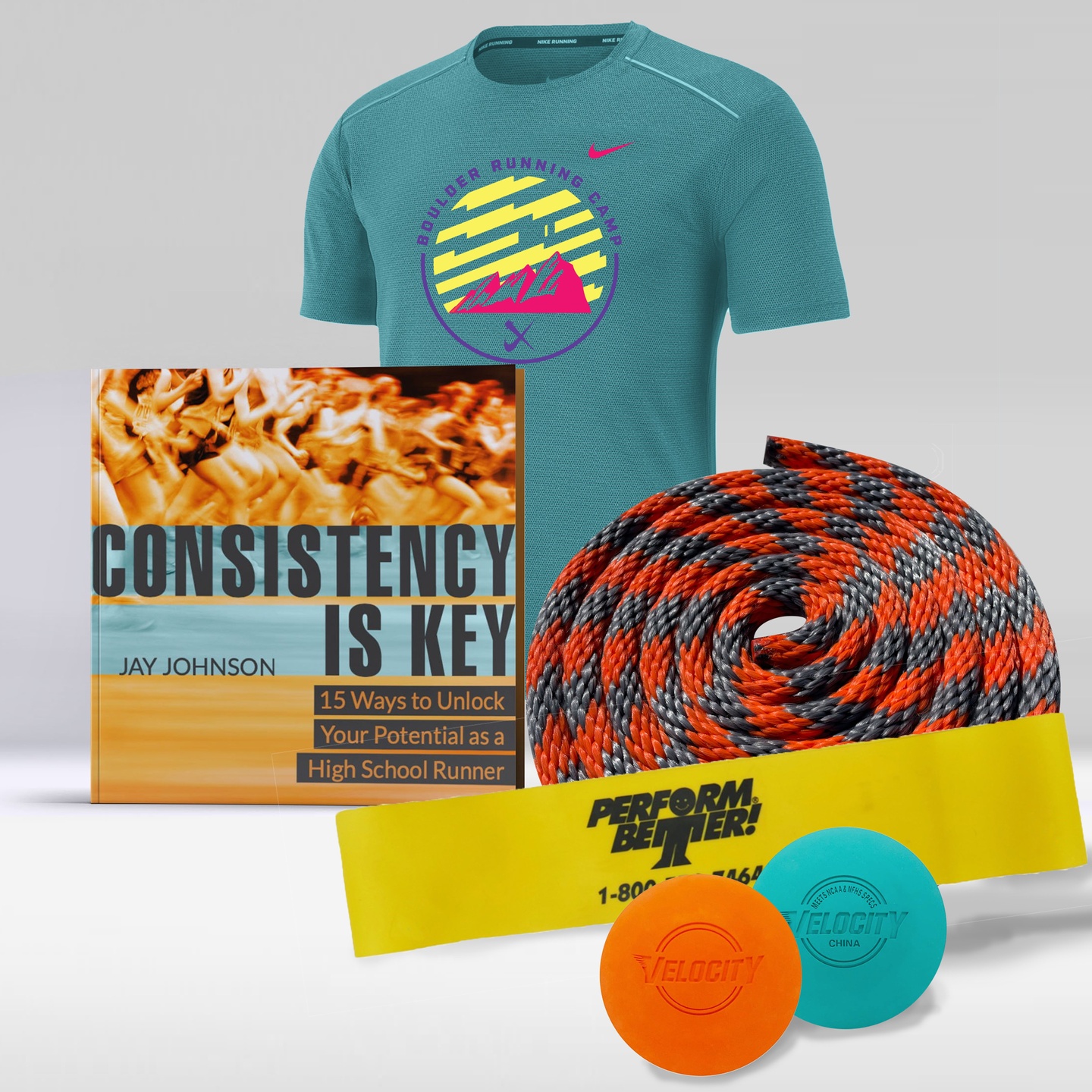 Here's what one coach had to say about his athlete attending the virtual camp.

I would also recommend it to runners who are on the fence and just need some extra motivation.

One of our runners attended this past winter and got a lot out of it. This kid is already pretty fired up, but he told me that a lot of the information helped reaffirm the good things we were doing in our program, and he also learned new things that maybe we weren't doing.

It was beneficial for him to hear some different voices and stories, as it is often easy to get stuck in our own bubbles.

As an example, he really enjoyed learning about Dylan Jacobs at Sandburg from Coach O'Malley.

Every weekend there was a new takeaway that helped him stay not only motivated but helped him take the next step as a serious runner.

Jay goes out of his way to make sure the content of his camps SUPPORTS what great programs are doing. He also does it in a way that leaves you feeling like you also learned something new and leaves you feeling energized and motivated!

Enrollment for one athlete is $95

Each team will get their own coupon code for the appropriate discount. Once you have your code then you can enroll.

Coaches come for FREE when five or more athletes register, or pay $85.

Coaches get lifetime access to the videos, plus the gear.

Email [email protected] about team discounts. If you want to enroll as a single coach click below and use the code coach at checkout.

Most parents believe there is a better way to train. There is.

Let Coach Jay help your child have a great summer of training so they can have a great cross country season and the chance to run PRs.

Summer training has always been about putting in the miles. The problem in 2021 is that kids have a weaker musculoskeletal system than athletes in previous decades (think more video games and less activity).

What today’s high school runner needs is a thoughtful progression of mileage and intensity, plus an integration of the “little things” to stay injury-free.

While many coaches have caught on to the importance of doing the little things, they don’t match this important work with the training theme of the day. They simply ask kids to “do some core” at the end of practice and call it a day. That’s better than nothing, but it's not optimal training.

What are the "little things" and what will a training day include?

Watch the video to see examples of the following, which athletes will do each day they train.

Give your child the gift of arriving at the starting line this fall knowing they put in their best summer of training. When you enroll your child in Coach Jay’s Summer Training you’ll get: 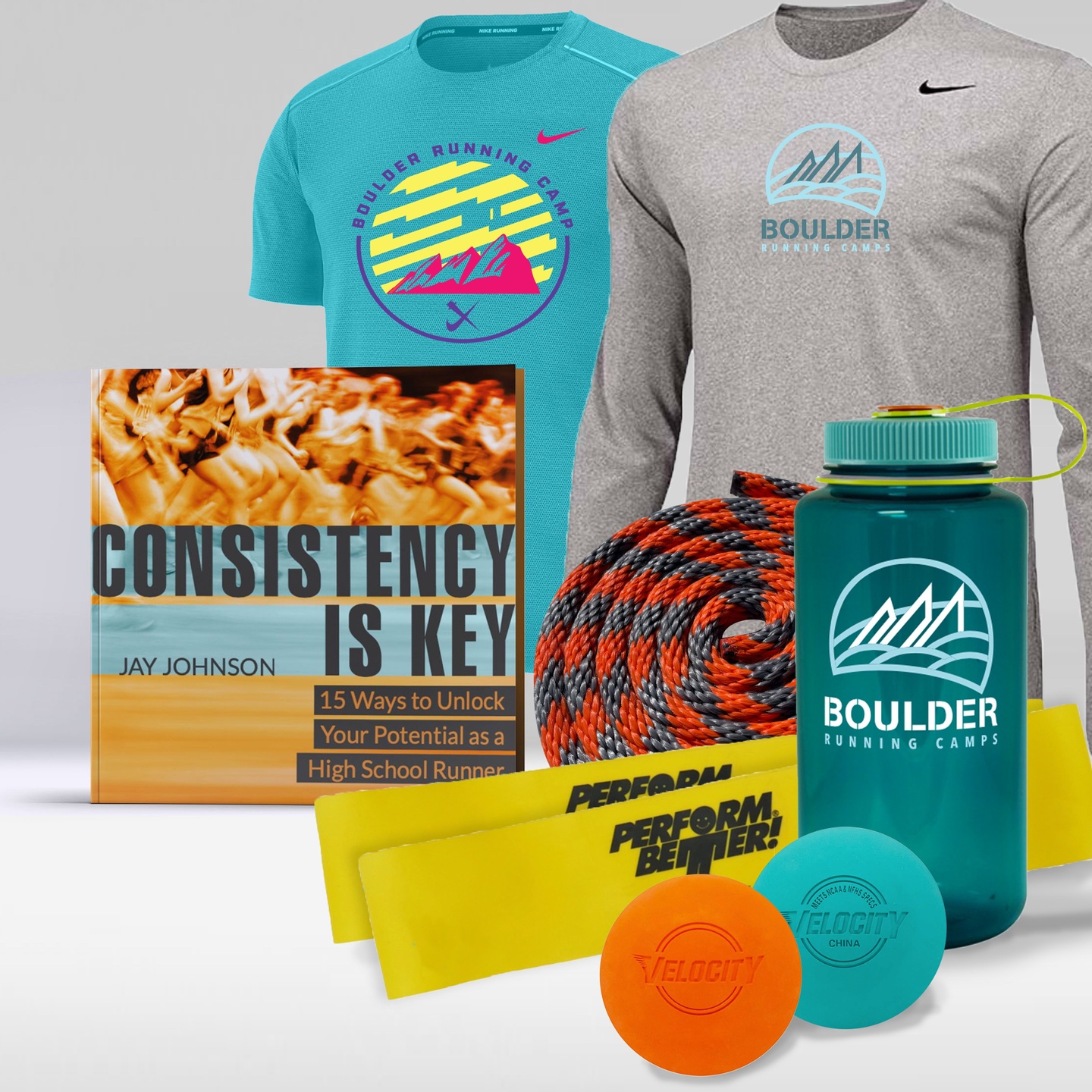 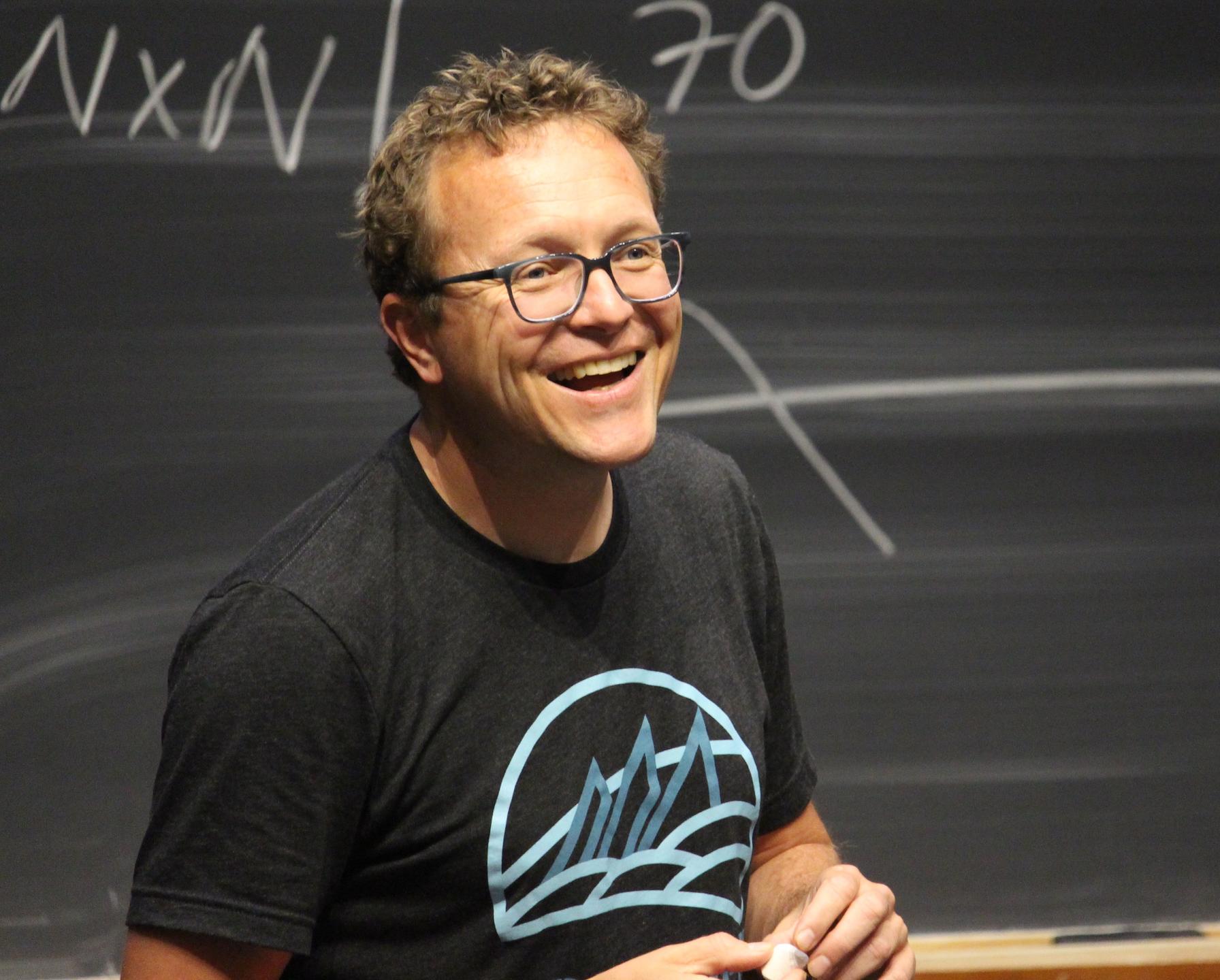 Coach Jay founded the Boulder Running Camps in 2002, which has been sponsored by Nike since its inception. He's coached high school, collegiate, and professional runners for more than two decades, including three USATF champions in cross country, indoor track, and road racing.
Johnson has a M.S. in kinesiology and applied physiology from the University of Colorado, where he was a member of the varsity cross country team featured in Chris Lear's cult-classic Running with the Buffaloes.
His first book for high school runners, Consistency Is Key: 15 Ways to Unlock Your Potential as a High School Runner, was released in June of 2020.

As a high school athlete, I desperately wanted to improve but I didn’t have a solid summer training plan.

I never felt confident when I toed the starting line in cross country. But as a collegiate athlete I trained under an iconic coach and trusted my training.

I went to the line centered and confident, knowing I had done everything in my power to run a great race. While I only won one cross country race in college, the confidence I had as an athlete was a powerful gift my coach gave me. I’d love to help your child have the same confidence this fall when they toe the starting line.

I’ve been infusing the “little things” into my training plans for over a decade. For most coaches, non-running work is frosting on the cake. But in my training it’s not only vital to performance, it’s as important as the running training.

Yes, your child will still spend more time running, but they should know that to stay injury-free they’ll need to “strengthen their chassis” in addition to the traditional “engine building” runners have done for decades.

What worked 10, 15, or 20 years ago for coaches and athletes won’t work today. Kids simply don’t have the same foundation of general strength previous generations had. Consistency is key for long term success in the sport – I can help your child have a consistent summer of training. 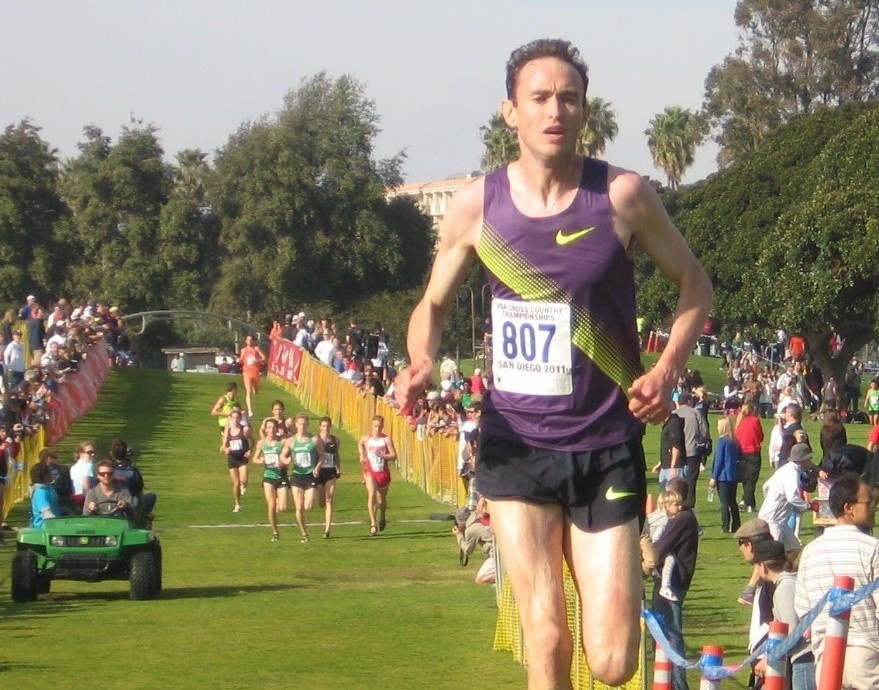 Coach Jay’s knowledge of the body, and how it performs best leads to his incredible ability to turn a distance runner into a finely tuned machine.

His track and strength workouts led me to a national title at the USA cross country championships. 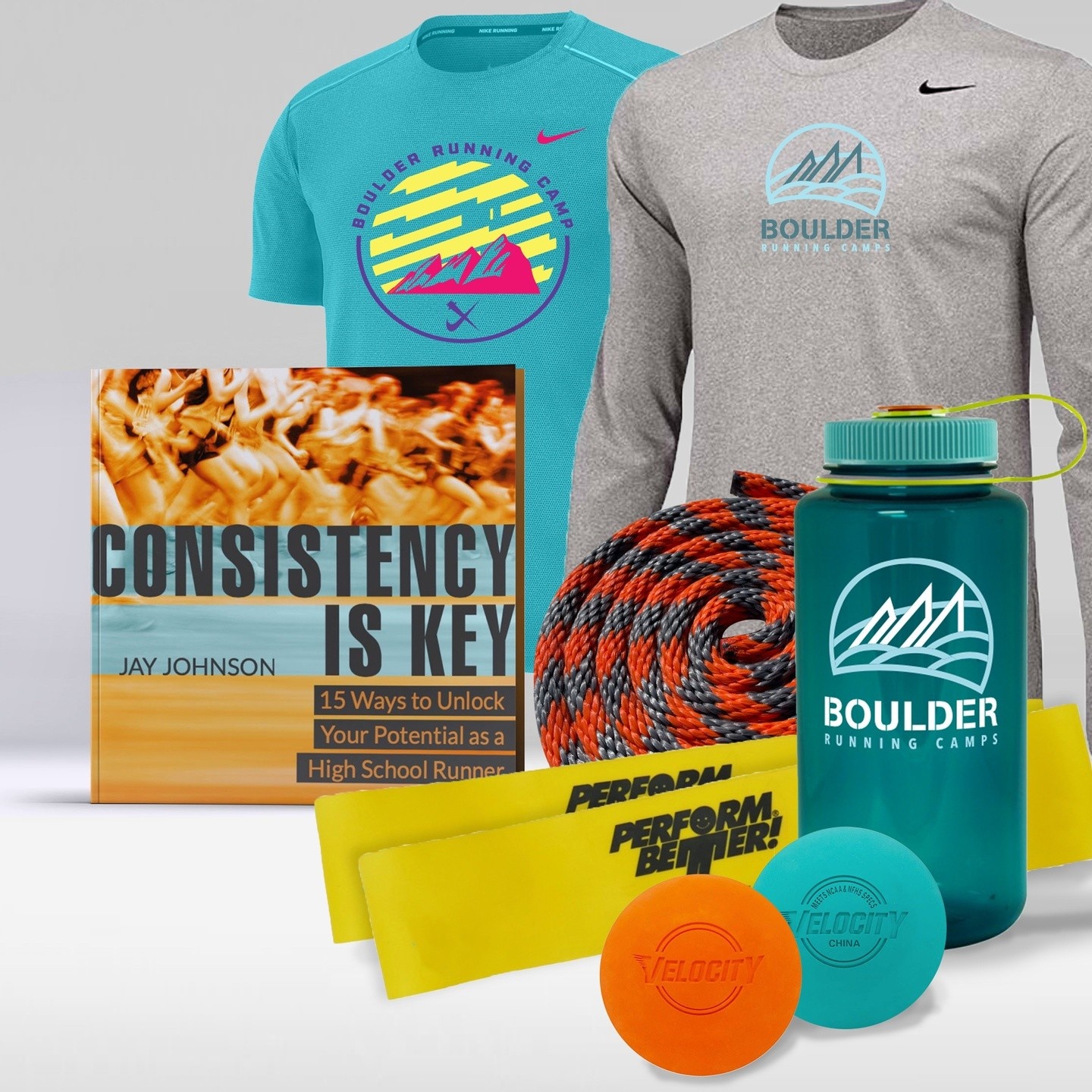 This option comes with a teal Nike Dri-Fit short sleeve-shirt. The shirt is a technical Dri-Fit fabric and is ideal for training. 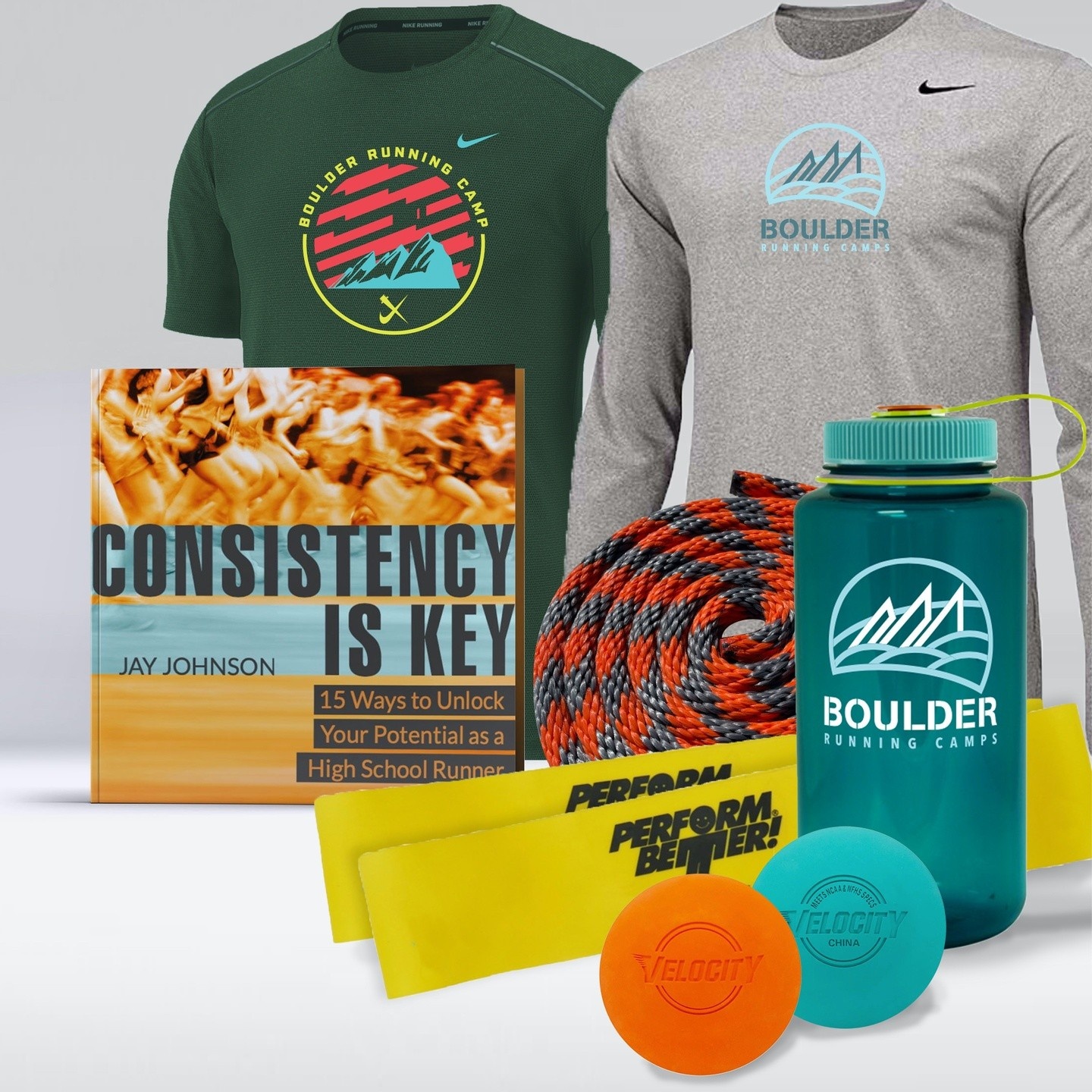 This option comes with a green Nike Dri-Fit short sleeve-shirt. The shirt has a classic cotton feel and can be worn out and about.

My monthly coaching rate (which I’m not currently offering) is $297. Normally it would cost you almost $900 for three months of coaching, which means this program is over $400 less than my normal fee.

We offer sibling discounts, team discounts and discounts to children of first responders and the armed forces. Email us here for more information about these discounts.

Get The Latest Camp News, plus FREE Training Videos 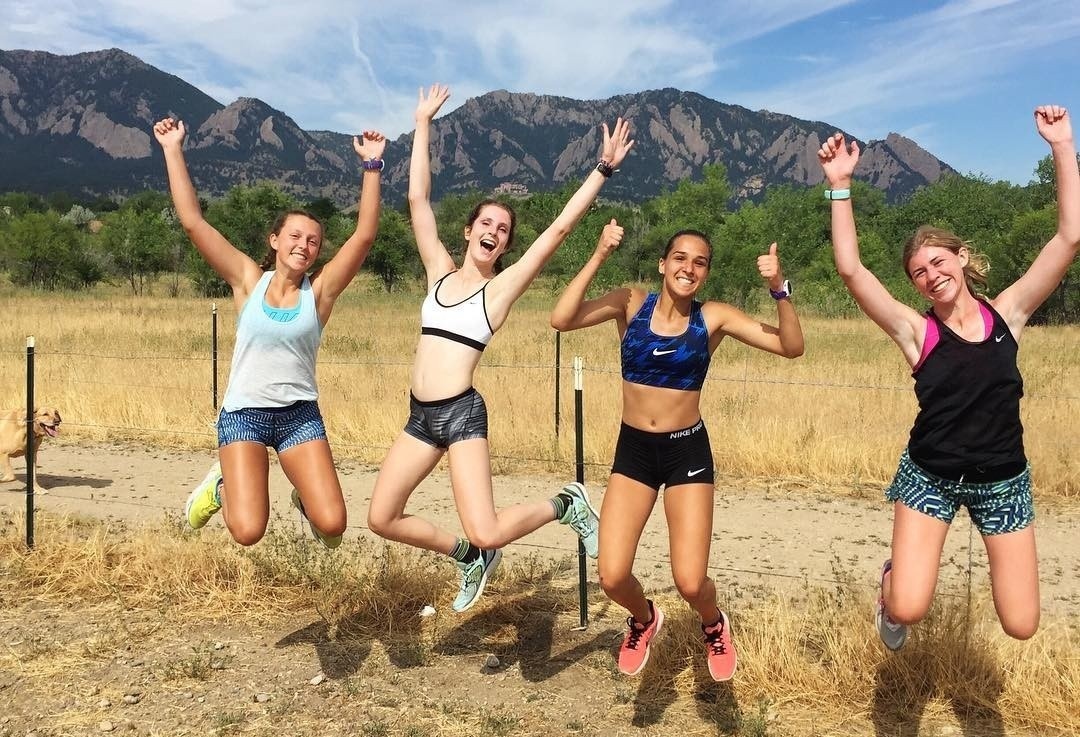 Get started today before this once in a lifetime opportunity expires.